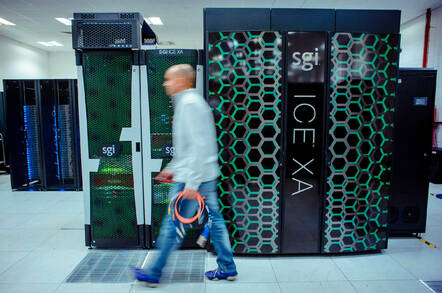 EPSRC has recently announced the new Tier-1 ARCHER2 HPC service and is also in the process of extending the UK's Tier-2 HPC systems. This will give users access to substantial amounts of new CPU and GPU hardware, so it's a perfect time to learn about how to use parallel HPC systems and how to program GPUs.

Hi! My name is Edoardo Coronado. I am a Mexican PhD student in Technologies of Information at the "Centro Singular de Investigación en Tecnoloxías Intelixentes" (CiTIUS) at the "Universidad de Santiago de Compostela" in Spain. I work on the optimisation of iterative solvers on accelerator devices. I have spent three months at EPCC at the University of Edinburgh under the HPC-Europa3 transnational access programme with Mr Adrian Jackson acting as my host.

The blog post below is based on the abstract of a talk at the PASC mini-symposium 'Modelling Cloud Physics: Preparing for Exascale' (Zurich, 13 June 2019).

The Met Office NERC Cloud model (MONC) is an atmospheric model used throughout the weather and climate community to study clouds and turbulent flows. This is often coupled with the CASIM microphysics model, which provides the capability to investigate interactions at the millimetre scale and study the formation and development of moisture. One of the main targets of these models is the problem of fog, which is very hard to model due to the high resolution required – for context the main UK weather forecast resolves to 1km, whereas the fog problem requires 1metre or less.

Recently EPCC's Alan Gray and I attended a workshop at Donington Park held by Roborace.  For those who've not heard of Roborace, it's a project to build and race autonomous cars, along the lines of Formula 1 but without any drivers or human control of the cars.  Actually, it's more like Formula E but without drivers, as the plan is for the cars to be electric.

A recent MSc project at EPCC has paved the way for improved diagnosis of eye-related conditions.

We have just reached the end of a short project collaborating with Atmospheric Geochemists at the universities of Edinburgh and Bristol. After they purchased two machines each, both with dual Intel Xeon Ivy-bridge 12-core CPUs and NVIDIA Tesla K20x GPUs, EPCC was tasked to investigate the feasability of using the GPUs to improve the performance of their software.

When you think about applications for high performance computing and large-scale simulations, you probably think of particle physics, or climate modelling, maybe molecular biology. You probably don't think of music. But the Next Generation Sound Synthesis project (NESS) may change that.

Scaling to thousands of GPUs on Titan

We have been among the first researchers to take advantage of the massive amounts of computing power available on the world's fastest "Titan" supercomputer (based at Oak Ridge National Laboratory). The full machine will boast 18 thousand GPUs, and just under half of these have been made available recently. We have shown that our highly scalable "Ludwig" soft matter physics application can efficiently take advantage of at least 8192 GPUs in parallel.

Programmability of GPUs (or accelerators in general) has improved since the days of the OpenGL shaders. First CUDA, and OpenCL later, have evolved to offer a reasonable way of programming efficient algorithms onto GPUs. However, despite this improvement, there is still a lot of effort involved in the development of code for accelerators. This is inevitable sometimes: if you have a particular algorithm and you want to have the maximum performance possible for a particular accelerator architecture, and you have the time to do it, you can immerse yourself in the marvellous world of CUDA/OpenCL low-level optimisation and stop reading. If time is critical for you, as it is for me, then you will love the latest advance in accelerator programmability: OpenACC.